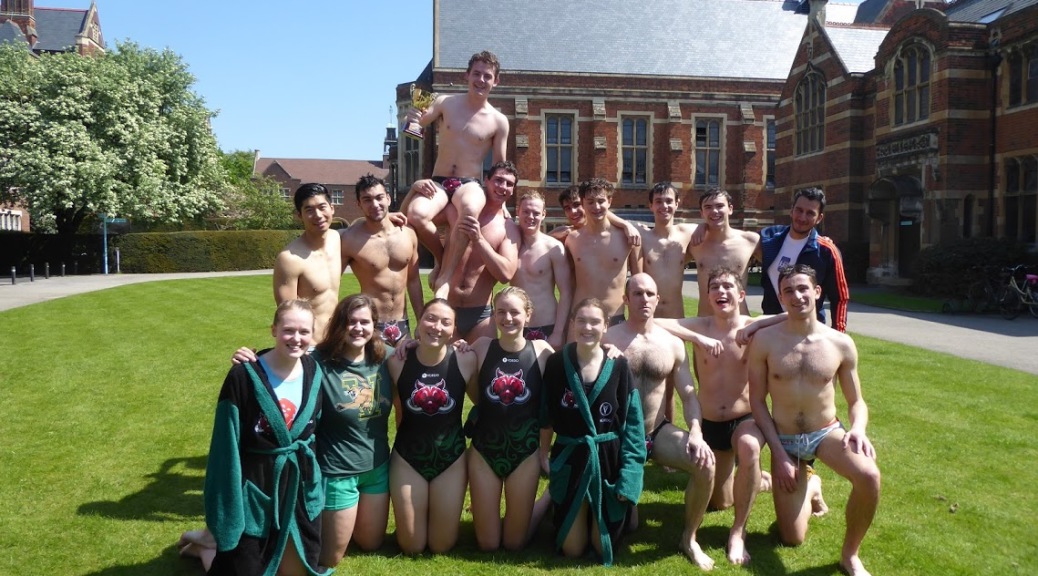 The first two weekends of Easter Term saw 6 teams consisting of 15 different colleges descend on the Leys Pool for the annual College Water Polo CUPPERS 2018! Every team was keen to beat Queerwin to end their winning streak, and despite some amazing playing unfortunately no one was successful.

Cuppers this year took the form of a round robin tournament, where the 4 highest scoring teams progressed through to semis, then the winners to played off in a 30 minute match in the final! There were a few new rules introduced to even the playing field, and to stop Queerwin’s annoying habit of bringing 30 rower lads to play every match and sub in new people every 30 seconds. These consisted of a max of 15 players per team, consisting of at least 3 girls, and a minimum of one non-university player and one girl in the water at a time.

After some close matches in the round robin, the four teams progressing to the semis were, in point order, Queerwin, Newnemmahouse, Sidney/Jesus/Catz and JChill. Robinson/Girton/Fitz gained no points after conceding all their matches, and Clare/Homerton opted out of the semis as it fell on the legendary C-Sunday, and the captains fancied day drinking a bit more than the suffocating, chlorinated atmosphere of the Leys (and fair enough really). The first semi final was Newnemmahouse vs Sidney/Jesus/Catz, which turned out to be an extremely tense match with a goal difference never greater than 1. The final score was 5-4 to Sidney/Jesus/Catz, unfortunately leaving the Newnemmahouse captain, Henry Stuart-Turner, without the opportunity of wearing a women’s water polo costume (a modern day corset for those that don’t know) in the final, as per a bet made with the Jesus captain. A devastating loss for us all. The next semi final was Queerwin vs JChill, which can only be described as a landslide victory for Queerwin with a score of 9-1. What happened JChill?! This left Queerwin vs Sidney/Jesus/Catz for a nail biting final, which I will leave to be described by Queerwin captain, Noah Milton…….

After wiping out the opposition, Sidney/Jesus/Catz proved themselves to Queerwin in a competitive cuppers final. Queerwin took the lead, but Sidney/Jesus/Catz fought hard for the title. A change to a more defensive strategy kept their goals to a minimum, while enabling us to squeeze in the odd goal here and there. The overall result, 6-3 to Queerwin was a (somewhat expected) delight, marking the third consecutive cuppers win for Queerwin.

Over the year, the Queerwin squad has grown massively. Quick-to-learn freshers improved their skills through the the weekly training sessions with the Leys (though the captain’s attendance may have been rare), building upon the already-strong base of university firsts and seconds players . Of course, being joined by an ex-blues player and resident legend, Toberg, always helps. The Michaelmas and Lent tournaments gave the newbies a taste of victory, so that when it was time for Cuppers, the squad had grown to 25 members, including 5 girls, all desperate to play. A victory in itself, but we had our sights on shinier glory. The team’s great teamwork led to some excellent games and victories, when every player was significant and the more experienced players didn’t dominate play.

Perhaps a more hidden side of Queerwin water polo this year have been the cherished socials. The social secretary and captain have been very keen on team bonding through swaps, socials, and their own invention ‘Beerpolo’. We hope to continue these newly established traditions into the years to come.

The triumphant weekend ended a brilliant year for Queerwin, with a promising future as many new players are looking towards joining the university teams come Michaelmas. So who knows, maybe this time next year we’ll be celebrating our fourth year of victory…