The Marlins have continued to grow and improve throughout the 2019/2020 season. Under the able captaincy of Nat Amos and Iris Hall, the Marlins have increased their training – both in and out of the pool – and continued to have more socials over the course of the year. This marks a continuation of the long-term plan to increase the competitiveness of the Marlins while not compromising on the fun! Despite a strong performance at Varsity, with improvements in speed in almost every event, the Marlins were narrowly pipped to the finish by a very strong Oxford team who are much larger in number due to their enviable training facilities. Special mentions must go to Nick Maini who smashed the 50 Fly and the members of the women’s team that stepped up to fill the gaps caused by a very last-minute absence! Despite this difficult loss, the Marlins went on to compete hard on the dancefloor in the night out following. The team continues to improve year on year, bring on Varsity 2021!

Iris Hall & Nat Amos
With continuing competitiveness of the Marlins, the team went from strength to strength throughout the year. Although this did not end in success in the pool the team continues to grow, even with the limited pooltime available to the team. 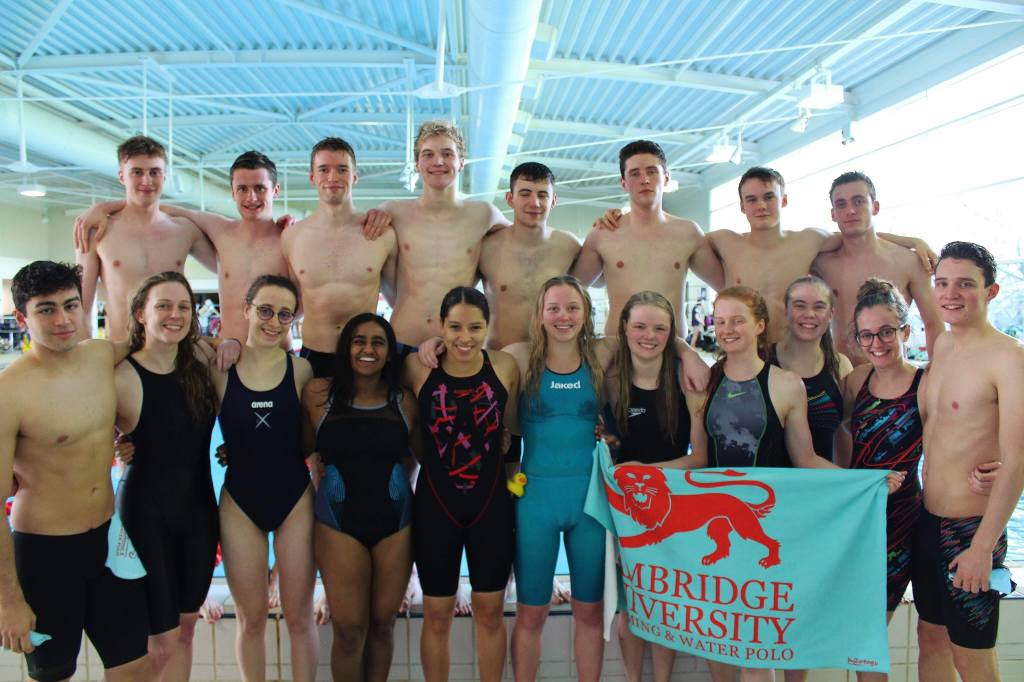 Blues Swimming Varsity 2020 was a closely fought contest, with Oxford winning by 97-83. The men’s teams tied 45-45, despite last minute injury to the Cambridge captain and breaststroke star, Lewis Waters. The men showed excellent team spirit in stepping up to race in last minute changes, with particular credit to Alfie Collins for rising to the challenge and achieving an excellent PB in the 100m breaststroke. There were outstanding swims by both the men’s and women’s Cambridge teams throughout the match, with our strength in depth highlighted by the fact that the swimmers achieved blues times for 22/28 individual swims. Club records were broken by Anna Kirk, Claire Collins, Alex Lezard, Theo Cannon, the women’s 4x50m medley relay team and the men’s 4x100m freestyle relay team. Carmen Lim raced in the Match’s first ever multi-classification events, winning both by a clear margin and breaking her own South East Asian records. Theo Cannon was the very deserving winner of ‘Swimmer of the Match’ for his record breaking 100m free, 200m IM and anchor leg of the 4x100m freestyle relay.

Lewis Waters & Juliet Merelie
In a closely fought Blues Swimming Varsity O*ford prevailed with a narrow win. Although Cambridge suffered late injuries, many club records were broken with several stand out performances. This included the Match’s first ever multi-classification events. 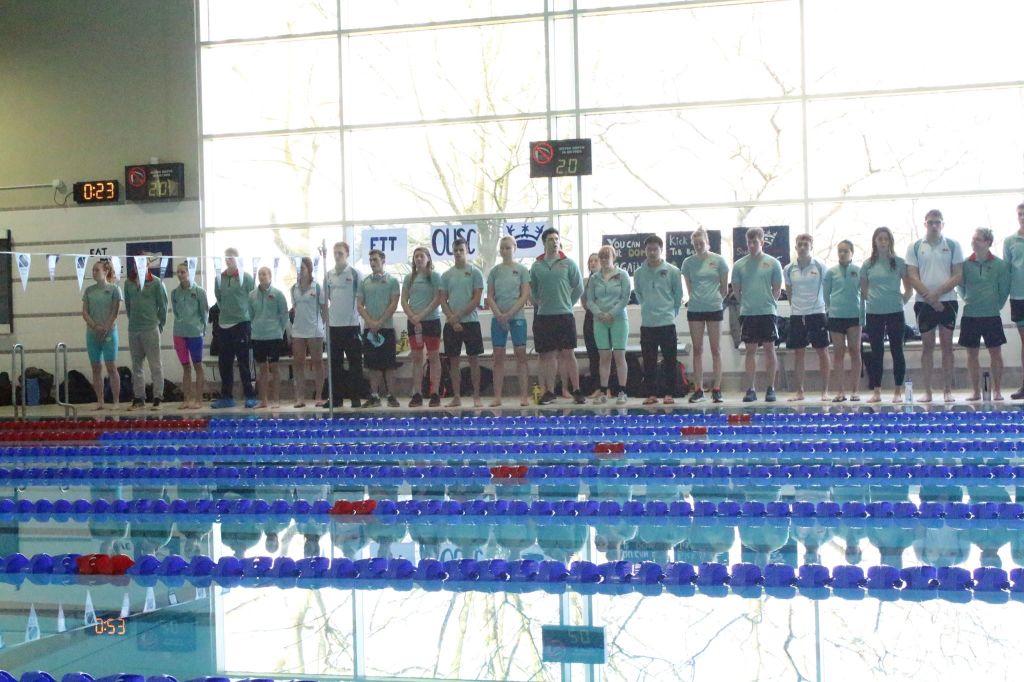 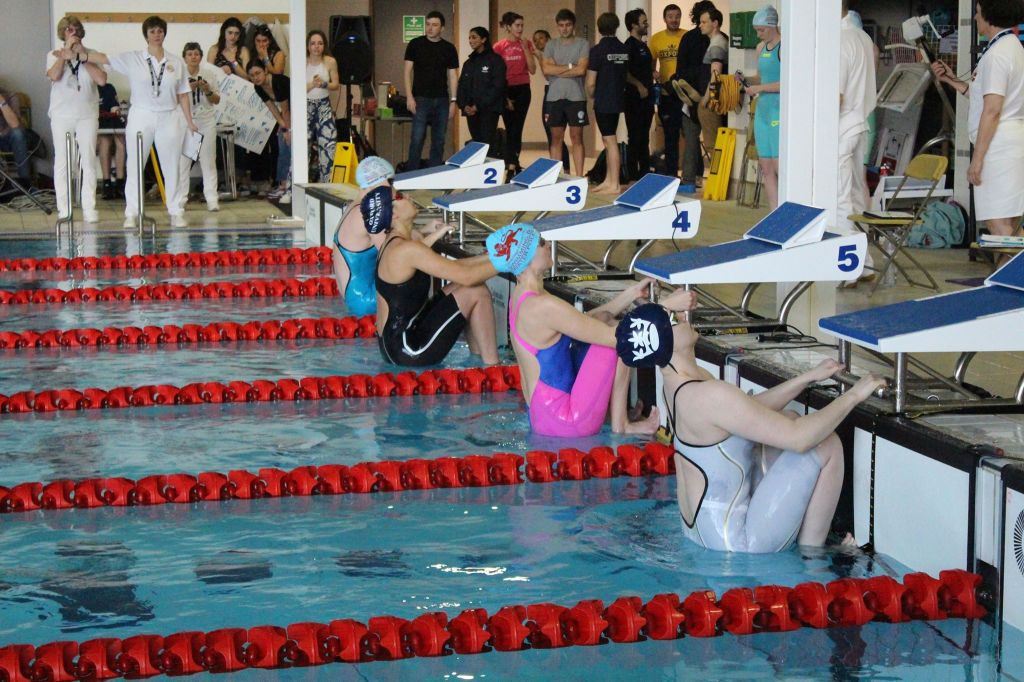 With no Biannual Channel Swim in 2019, the Cambridge open water season was geared towards our annual varsity race at Henley.

The swim was 2.1km upstream along the Henley regatta rowing course with the race start at 5:40am. This year the varsity swimmers were combined into the “performance wave” of the Henley Classic Swim to add to the competitive feel. All the Cambridge team put in strong swims to be proud of, especially considering how new to open water swimming some of them were. Special mentions go to Naoki Toyomura and Evie Anema as the fastest Cambridge man and woman respectively.

Sadly, our efforts were in vain and Oxford won both Men’s and Women’s Varsity. However, the Women’s Varsity was closely contested with Oxford only narrowly coming out on top. There were no alumni races this year, but Cambridge did win the mob match for the 5th consecutive year. The Cambridge team reflected the strong diversity in open water swimming with pentathletes, triathletes, swimmers and water polo players all involved. 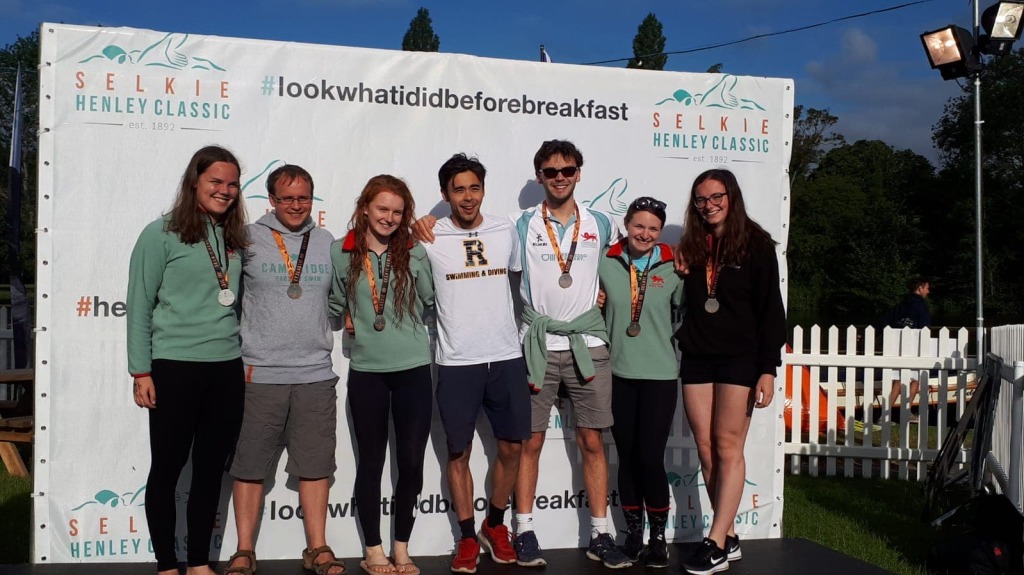 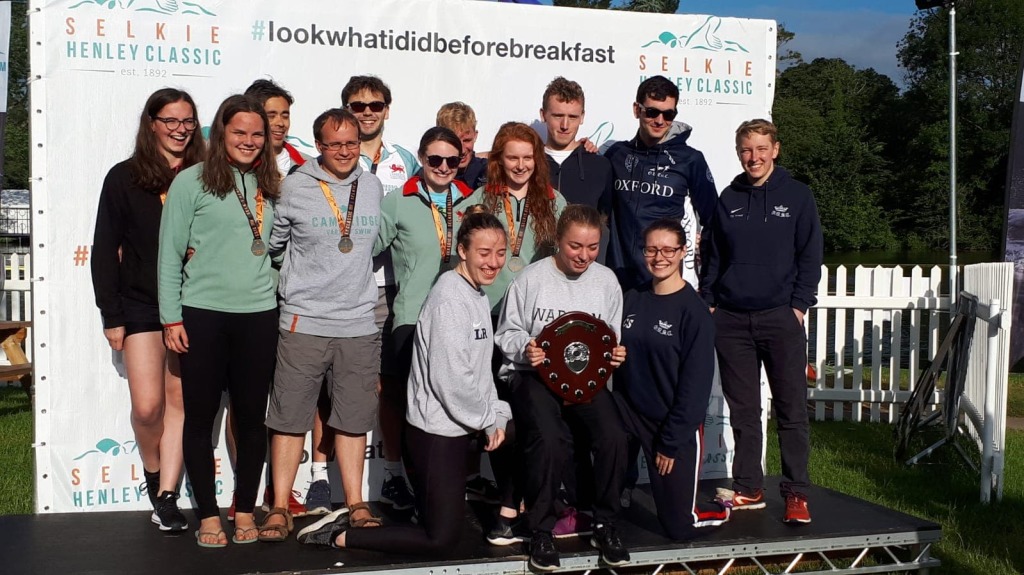 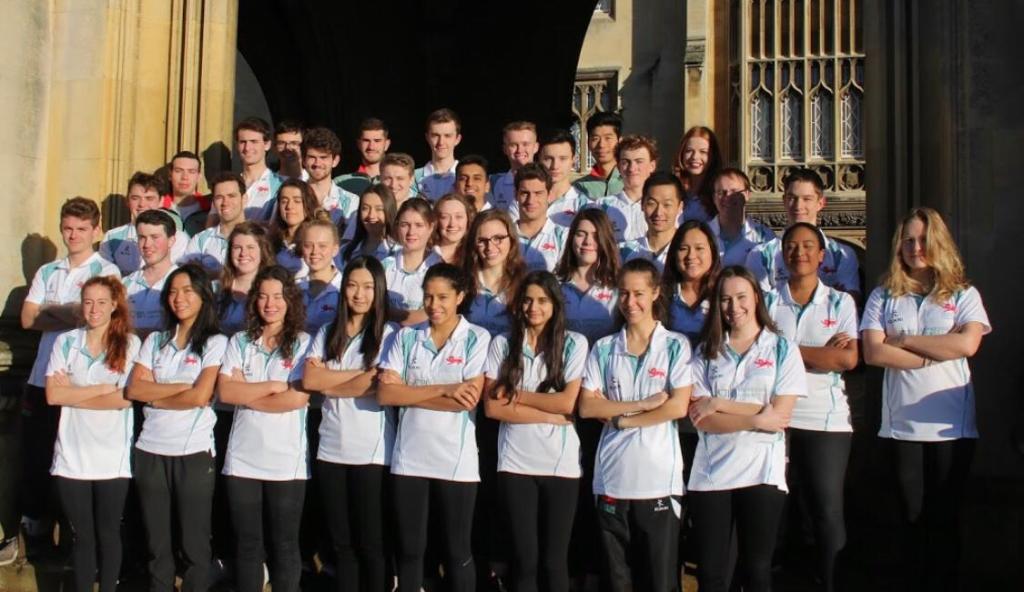 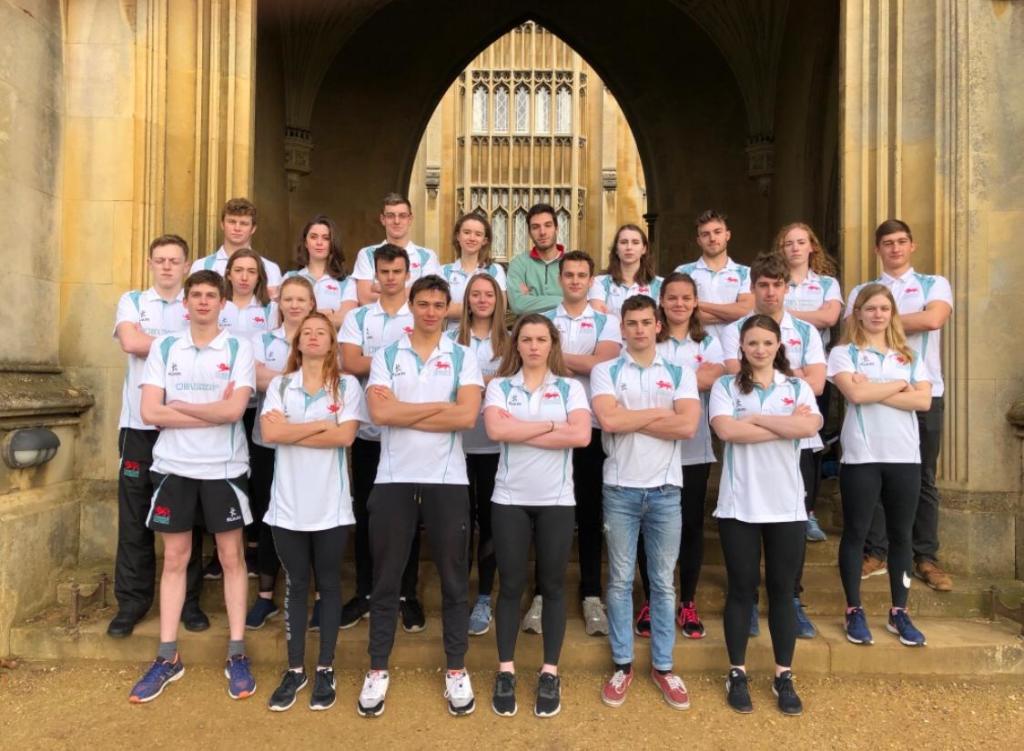 On 20th October 2018, Cambridge University Swimming Club welcomed UCL, KCL, Imperial and Leicester to Parkside Pools for the annual season-opening Relays Gala. Cambridge entered two teams, named Team Alpha and Team Aleph in honour of random alphabets worldwide. With neither team selected to be stronger than the other, the stage (pool) was set for some tight races. Several Cambridge newbies made their debuts in light blue – on the male side Joe Anderson, Jacques Bonsell, Theo Cannon and Segev Gonen Cohen all appeared for the first time whilst Eve Hull, Anna Kirk, Meghan Mulhern, Ellie O’Keeffe, and Elizabeth Perry all made their debuts on the women’s team.

The first half of the event consisted of the individual events – 100m of each of the four strokes and 100m individual medley were contested. Some impressive victories, particularly by Bonsell, Cannon and Kirk in the Men’s 100m freestyle, 100m butterfly, and Ladies’ 100m backstroke respectively, saw both Cambridge teams at the top of the leaderboard at halfway. However, having won the Ladies’ 100m individual medley and the Men’s 100m backstroke, UCL were close behind just 5 points down.

The events in the second half were the relays. 4 x 50m relays of each stroke for each gender were raced, and then mixed gender 8 x 50m medley and 8 x 50m freestyle relays concluded the competition. Following on from the strong individual events, Cambridge’s swimmers continued to ooze speed and class as they extended their leads at the top of the points table, winning every relay and getting a 1-2 finish in six out of the ten relays. The highlight of the second half was no doubt the Cambridge breaststrokers squaring off against each other, as Daniel Toy pipped a tiring Finn Harman in the first leg of the breaststroke relay.

The final standings were:

Thank you to everyone who came to make this memorable event happen, and well done to our winners Team Cambridge! 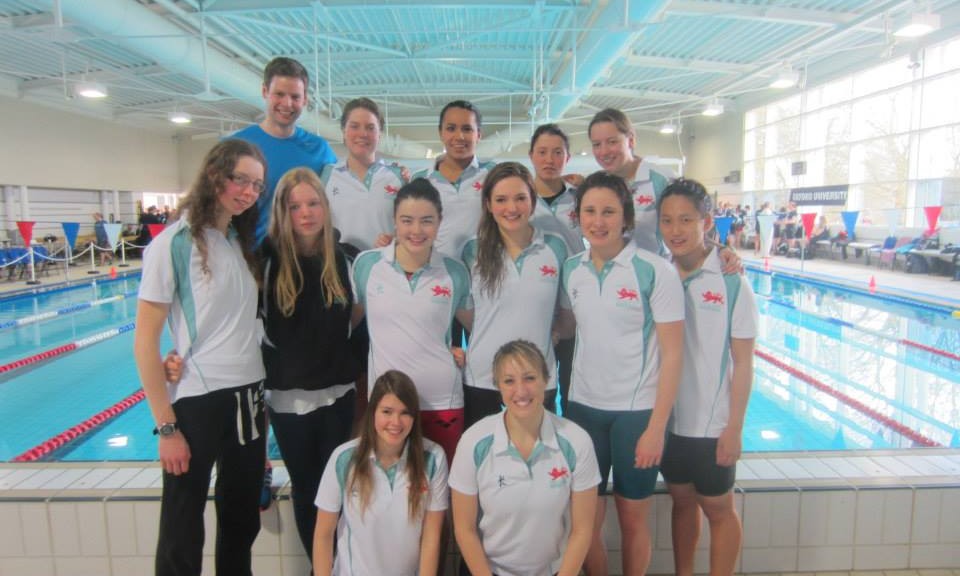 The swim team finished 9th in the BUCS championship national finals for the 2013/2014 season. A fantastic feat, finishing behind teams with Olympians and state of the art facilities. Well done team! Due to this incredibly result, next season will see a second team being entered into the BUCS competition.