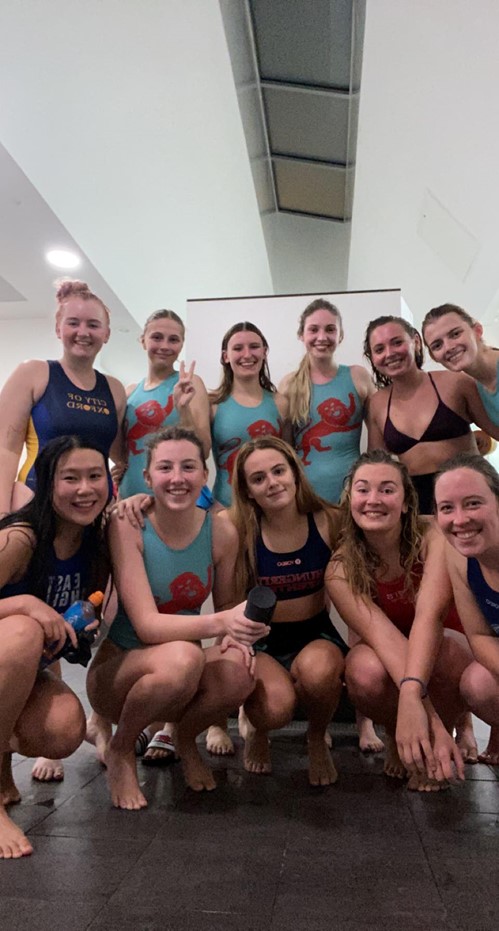 Despite the severe restrictions imposed on the sport by the pandemic, the 2020/21 season for Cambridge University Water Polo was not completely written off. In Michaelmas 2020, both the men’s and women’s side trained regularly, with swimming sets at Abbey pool and weekly training at Northampton School for Boys for the men’s side, while the ladies’ side focused on development sessions for many people who had not played the sport before. The advent of lockdown towards the end of Michaelmas, and the remote nature of Lent term for many, changed the club’s activities towards online circuits, some sessions being joint between the squads, and paired training for those in Cambridge, helping to keep spirits up and ensure everyone remained active during a difficult term. Returning to Cambridge for the Easter term moved the circuits sessions to Jesus Green, as well as allowed players to return to the pool for regular group swims. Easter term culminated in a couple of friendly matches for the men’s team, pitting an out of practise 13 players against regularly training teams from Nottingham and Loughborough. These matches, while challenging, provided an excellent opportunity to see some of the 2020 intake in action, in the first match time all year. College league, following the conclusion of exams, also gave a lot of the ladies’ side intake their first experience of water polo matches.

For the 2021/22 season, both teams have hit the ground running, with a return to regular BUCS matches and full training. The training venue has moved to Abbey Pool this year, involving the purchase of some new goals, and both the men’s and ladies’ side have 3 hours in the water each week there. The move to Abbey allows for an increased training capacity, meaning that the recruitment this year (with lots of students across the university looking to try new sports) has brought the ladies’ team up to 23 members, and the men’s team to 33. The even volume of training for all members has meant that we’ve seen great improvement this term across the board.

With respect to BUCS matches this term, the ladies team have played 5, winning 2 of them (including their first match against Birmingham, winning by 1 goal) and losing 3. Both men’s sides are still chasing their first wins of term, with the firsts having played six close matches, losing three of them by 2 goals or less, and the seconds having played two this term. Both sides have also had hugely beneficial training matches against KCL and City of Cambridge.

Despite the tough term of matches for the men’s side, this year’s intake has seen a large range of playing abilities join the side, with our solid defence during matches meaning that they are all low scoring, tense events. For both teams, the score line of matches has seemed unrepresentative of the exhausting battles we’re seeing in the pool, with both Cambridge and opposition teams giving it their all.

In January, we look forward to the return of the annual training camp, where the club will revisit Malta before the start of Lent term. The strong attendance from both sides on tour means that Lent term is looking very promising, where varsity and the second half of BUCS matches will benefit from the fitness gains made in Malta.