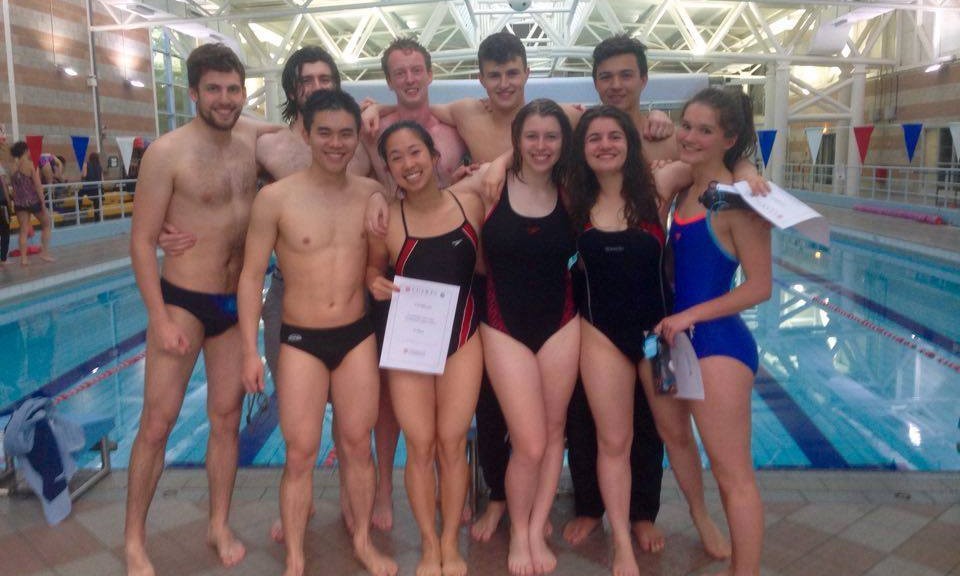 Last Saturday, the 7th of May, teams of a record number of 17 colleges gathered at Abbey Leisure Complex to compete against each other in the 25m pool. Teams arrived in great spirit – despite the 2-3 mile cycle from town. They were greeted by officials wearing shiny party hats and after a few announcements warm-up was on the way. It was great to see swimmers of all abilities come together during this friendly competition. Since half and full blues swimmers are not allowed to compete in individual races, these were an ideal place for some to experience their first ever swimming race! The ones I personally talked to all loved it but where absolutely destroyed afterwards. That’s exactly the way you should be feeling after a good race! The relays featured a significant number of blues swimmers – a very inspiring sight for some of the less experienced competitors.

Overall, the atmosphere at the pool was fantastic with lots of teams cheering on their mates and even some turning up just to support their friends and partners! As it drew to 8 pm, the tension rose and everyone was keen to hear the rankings. Positions were announced from 5th upwards. St John’s, a favourite due to its large number of members of the university team, took the 1st prizes home. These consisted of drinking bottles filled with roses and a lovely certificate. I wonder if anyone will frame it at home. The winning mens’ team received shower gels and the ladies’ team nail polish. No gender stereotypes there.

Swimming cuppers 2k16 was a really positive, friendly and cheerful event that saw lots of great performances from both professional and amateur swimmers from 17 colleges. We hope that next year will see even more colleges participate. For some, this was their first time racing and who knows, maybe one or two were inspired to take up the fantastic sport that is swimming?

Ps. The final ranking for those who want the details: