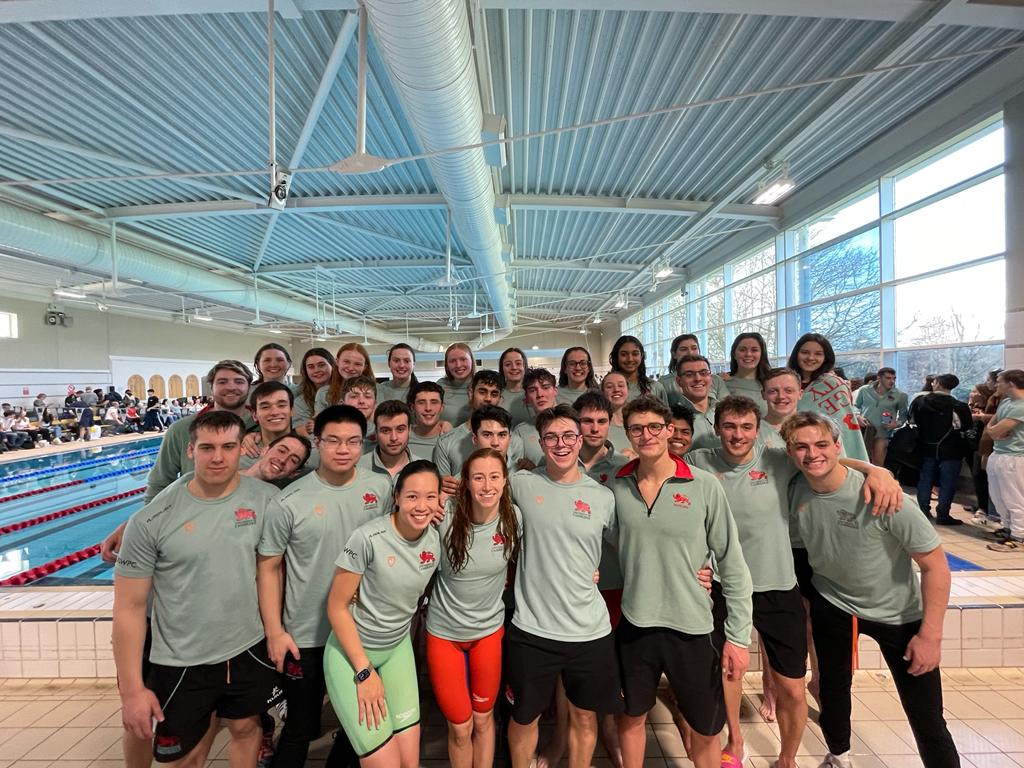 Varsity was back to its roots this year. Hosted at the Rosenblatt pool, Varsity started early for the Blues team as we all travelled up at … 5.30am, which led to a lot of people having a cheeky nap on the coach. Despite the sleepy start, the team was in great spirits as we cheered on the Seconds to a fantastic performance. Then, at 11am, it was time for the Blues to parade and perform. 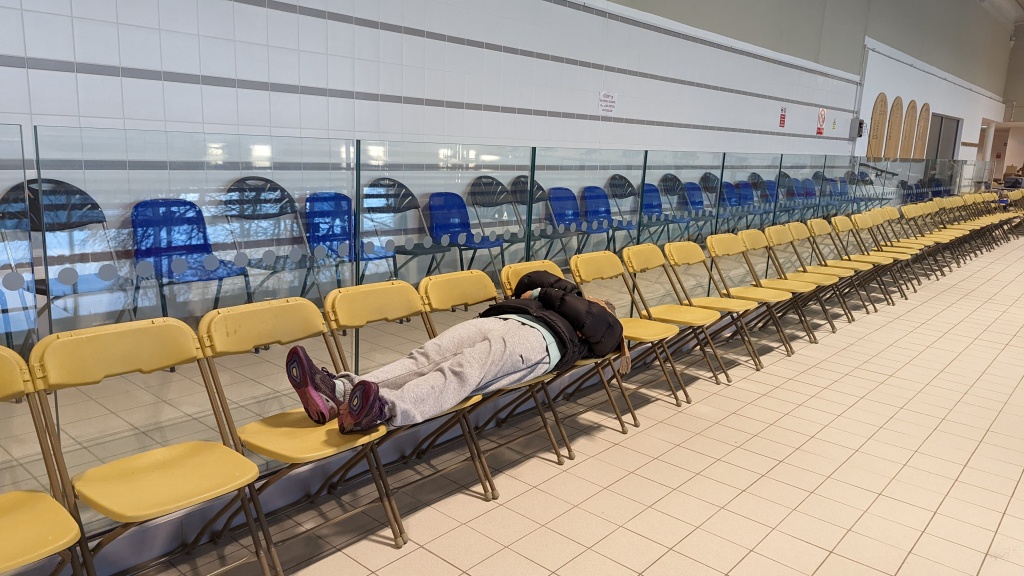 After a confusing last few years, the team was back and ready to hit the ground running. The team has put in an incredible amount of work this season and despite only having 5 sessions a week, having an almost record breaking number of injuries: from sprains, to torn muscles, to broken feet, we were looking strong and feeling excited for the battle we were preparing for. With the camp training under our belt, coached by the one and only El Captain, Coach Collins, only a month prior to Varsity, confidence was high and the team had an incredible atmosphere. 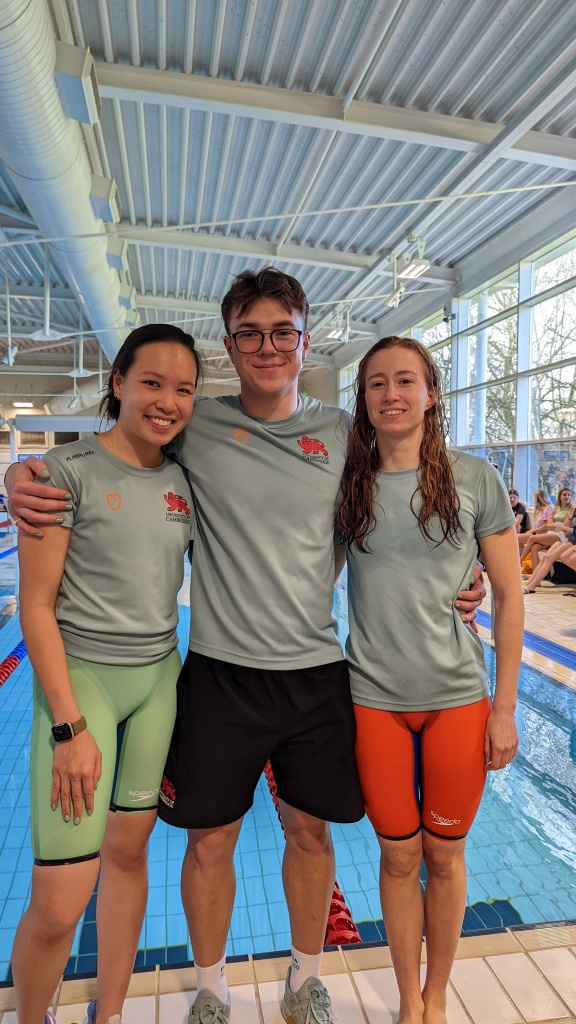 Our very own Captain, Ellie O’Keeffe, and Justine Rannou, a first time Varsity swimmer, led us off to a flying start, with Ellie breaking a 12 year old club record in the 200 IM going an incredible time of 2:22.15 and Justine coming shortly behind.
The guys were already jealous of the strong female performance. So, the dynamic duo of Theo and Leo (Cannon and Karski) stepped up to the blocks for their 200 IM. They took matters into their own hands, with Theo breaking his own club record in a spectacular time of 2:01.05, and Leo following hot on Oxford’s heels for another 2nd/4th finish.

After this incredible start, the 100 Backstroke was up next. Second year’s Sophie O’Keeffe and Clemmie Butler Brown performed fantastically, with both swimmers getting best times and Sophie smashing the blues time, smashing the O*ford swimmers by over 2 seconds and winning our first race of the meet. In a close finish, Clemmie was unfortunately touched out by her competitor, but put in a brilliant race.
In an even closer finish, the guys race led to all swimmers finishing within 0.5 seconds of each other and an exhilarating race. Fresher Yann Divet and CUSWPC Veteran Kaz Uzwyshyn-Jones smashed out two blues times with Kaz achieving his first ever in his final year of racing.

200 Free was up next, with Jasmine Gray and Yoshi Eschen stepping up and both achieving personal bests.
CUSWPC legend Jacques Bonsell dove in next with fresher Tom Woolley. A solid 2nd/3rd performance from the boys with two fantastic swims and Tom achieved his first 200 Free PB in 4 years! 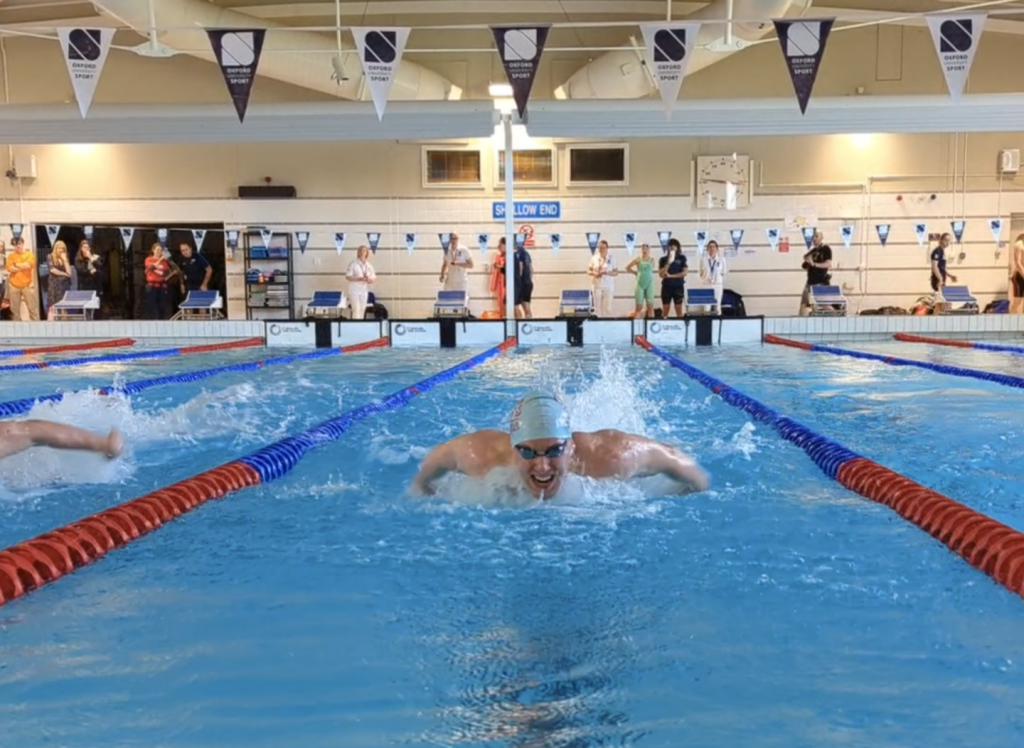 Ellie was back up again for the 100 Fly, along with fresher Megan Kemp. Both swam fantastically with Ellie getting a close second and Meg getting a brilliant personal best time.
Up next Hugo Bellamy and Alex Song swam a strong 100 Fly. Hugo managed to equal his previous record and Song came in strong just behind.
Our very own president, Carmen Lim, stepped for a 50 Free. Not only did she hit a strong personal best, she also went the fastest S8 50 Free in Asia for this season!

After a short break, it was time for some distance. Yoshi was up once again but this time with Fresher/OAP Georgina Quayle to race the 400 Free. Despite both girls being more used to choppier waters, they swam incredibly well, with Yoshi getting a blue and personal best and Georgina swimming her heart out for a personal best as well.
After the girls was one of the most exciting 400 Free races I have witnessed in a long time. Jacques was on the blocks again, accompanied by Fresher and BNOC Flynn Ryan. The front pack came in to all finish within about of a second of each other with Jacques being touched out by O*ford’s Max Loake. Flynn finished in an incredible personal best of 11 seconds!

Next up was the 100 Breast, with Lili Csada and Sara Mahmmud both performing in their first Varsitys. They gave their all, finishing some great races but couldn’t quite reach the O*ford girls.
The guys 100 Breast was a tough battle. Giorgos Papageorgiou smashing a big personal best, getting his blues time and beating the O*ford team captain. While Maxim de Wildt managed to hold onto the ex-Olympic gold medalist from O*ford … for 25 metres, before finishing 0.3 behind the next O*ford swimmer. The boys came out with a strong 2nd/4th finish. 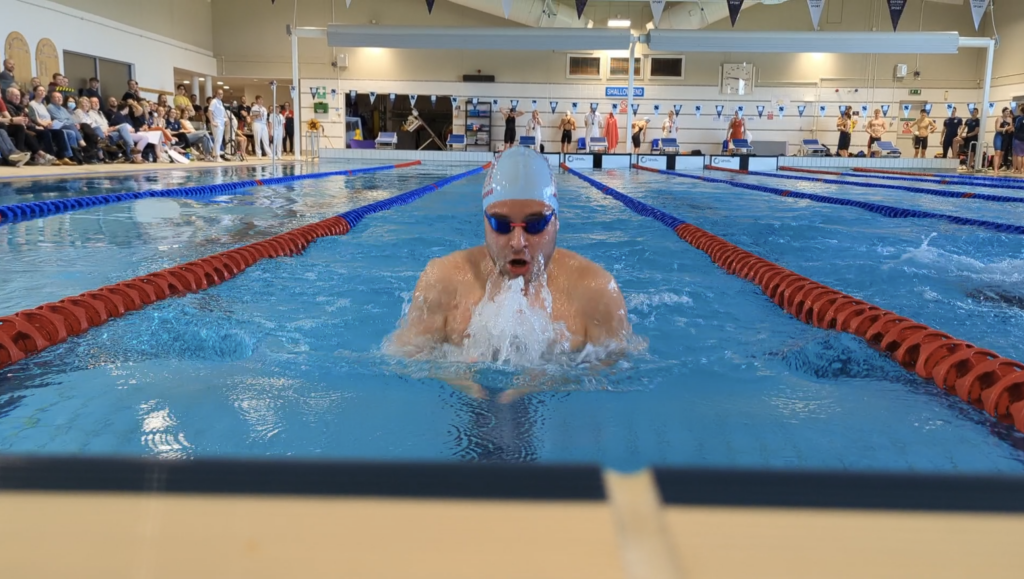 Then we came to the final individual race, the 100 Free. For the women’s race, Sophie O’Keeffe was back up again with 6 year CUSWPC veteran Charlotte Rowlands, who was performing with a broken foot! Sophie came in 2nd with an awesome personal best and blues time, with Charlotte close behind and only 0.4 off her personal best.
The boys then stepped up. Theo the Cannon Cannon was back again to smash another personal best, beating his own record and became the first CUSWPC swimmer to ever go under 50 seconds for 100 Free! Following close behind was Jonnie James, who claimed a personal best and his first ever blues time in his first full season in the Blues team. 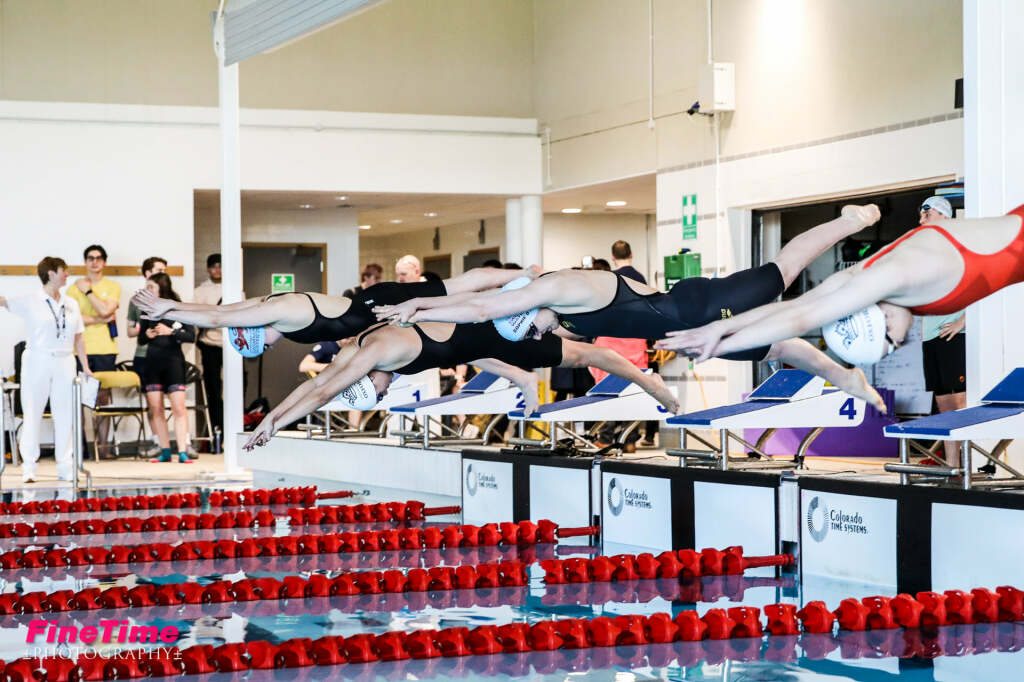 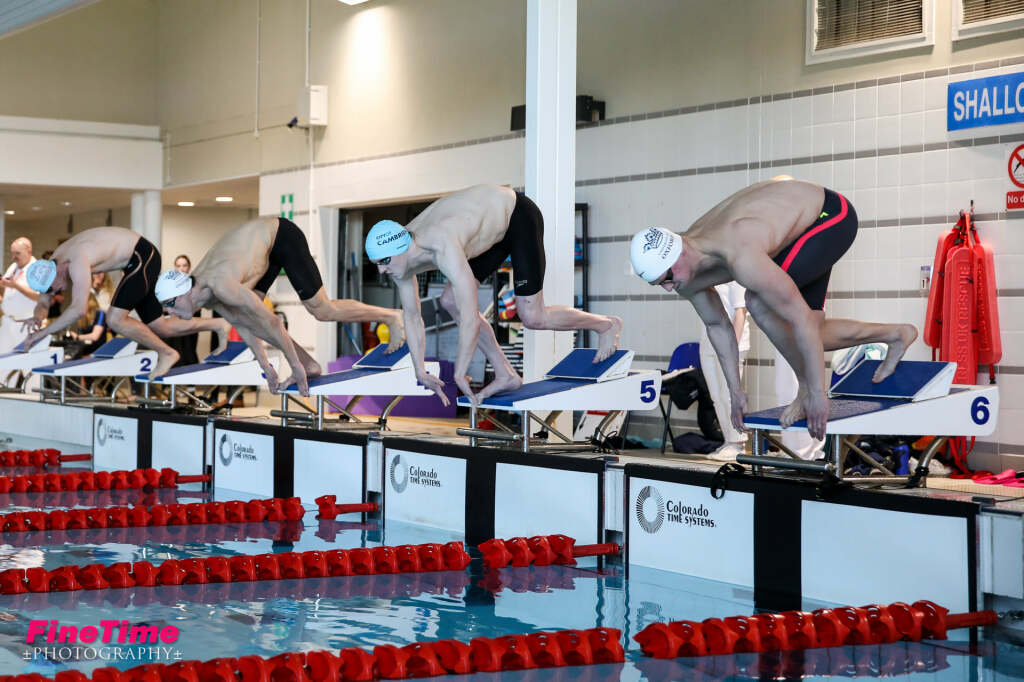 Second break over, and it was time for the relays, and as always, these supplied some incredible swimming and amazing races.
For the Women’s 4×100 medley relay we had Clemmie Butler Brown on the Back, Alex Vayro on the Breast, Megan Kemp on the Fly and Ellie Mason on the Free. The girls performed fantastically and hit great times.
For the Men’s 4×100 medley relay we had Alex Goodacre, resident Geriatric, on the Backstroke, Samrahn Sandhu on the Breast, Kashif Carter on the Fly, and finally Ben Carter on the Free. 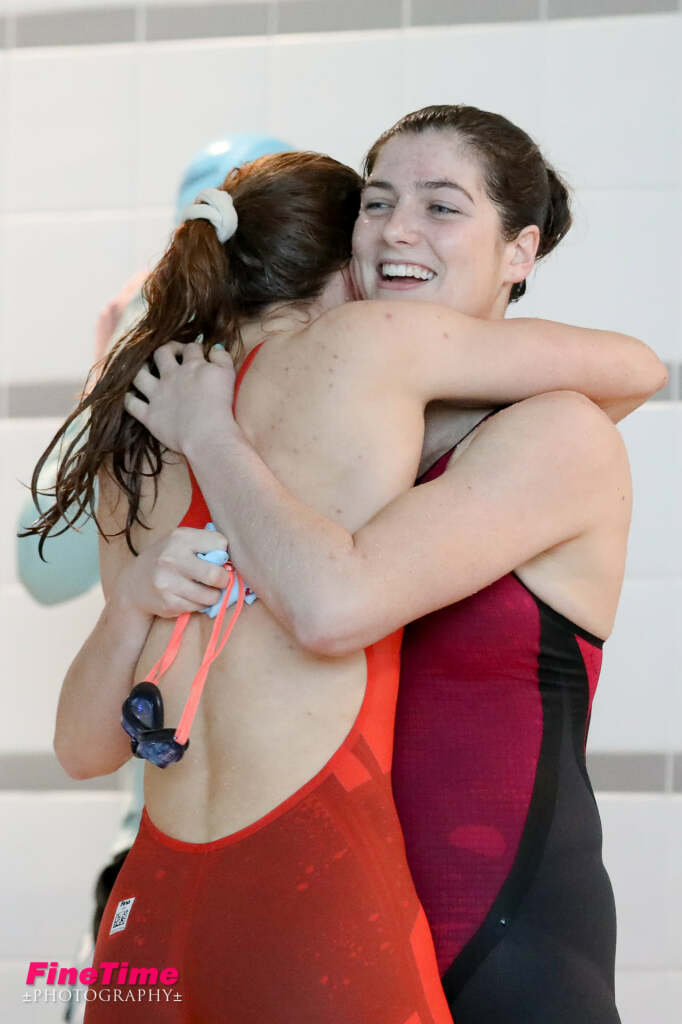 Finally, my personal highlight from the competition, the 4×100 Free Relays. Both teams beat Oxford and broke club records and did the team proud.
The girls were led off by Jasmine Gray, followed shortly by Ellie O’Keeffe, then Charlotte Rowlands and then brought home by Sophie O’Keeffe in an incredible final time of 4:01.03.
For the guys, The Cannon led us off, followed by a strong Hugo Bellamy, then Jacques Bonsell whipped out a swim, anchorman Tom Woolley smashed out the back end to bring home in a final time of 3:24.85.

Overall the team managed to achieve a record breaking 18 individual blues times, 6 club records. Despite this incredible performance from the whole team, it was sadly just not enough this year. For a team with only 5 sessions a week and a lack of our own pool, we surpassed even our own expectations.

We would like to say a massive thank you to Oxford for so graciously hosting us this Varsity, to Felix Gallagher for organising this fantastic weekend, to the Oxford Captains Sophie Lawrence and Max Underwood, and finally to our incredible Coach, Chris Greenhalgh, and all our friends and family who have helped us along the way!

Hope to see you all next when we face off against the dreaded O*ford, but this time on home turf.

As always, lots of love,

CUSWPC are running a 24h Swimathon to raise money for Ukraine. We will each be swimming in 30 min slots from 5pm on Monday 14th of March to 5pm on Tuesday 15th of March. We are raising money for the Red Cross effort in Ukraine and would really appreciate any support you can show, even if it just sharing the cause with friends and family. If you are able to donate, our just giving page is linked in our bio. Thank you in advance.
https://www.justgiving.com/…/cuswpc-swimathon-for-ukraine 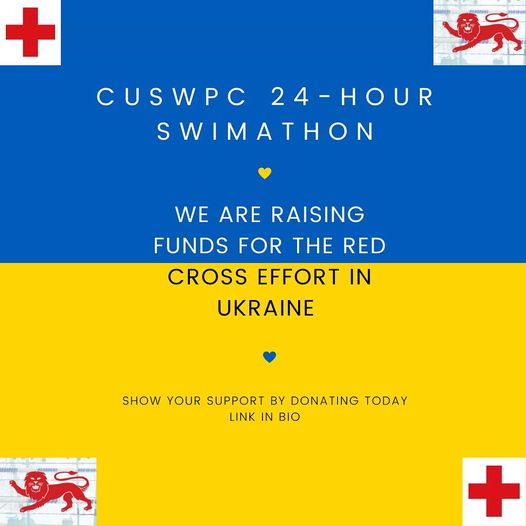