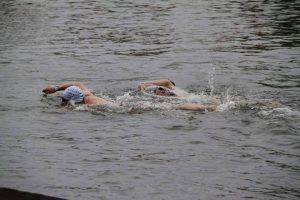 On the 26th of June,  8 Cambridge athletes travelled to Henley-on-Thames in preparation of one the biggest races on their sporting calendar. They were about to do what few other Cambridge student athletes have ever done before. Henley’s hallowed 2112m stretch of the River Thames, from Temple Island to the Leander Club, is no stranger to competitions. But it is less accustomed to ones quite like this. For not only was this an Oxf*rd vs Cambridge Varsity event but, unlike the rowers training on the river when the Cambridge team arrived, the Varsity teams would be competing in, not on, the water. Since 2014, the Varsity Swim has garnished the Henley Classic, a public swimming competition that takes place over the same stretch of the Thames as Henley Royal Regatta. With two Oxford wins in the books from 2014 and 2015, the Cambridge team of Matthew Chadwick (Sidney Sussex, acting Captain), Erik Sullivan (Emmanuel), Callum Chivers (Queens’), Andrew Ng (Wolfson), Rebecca Hughes (Trinity), Lydia Woodward (Newnham) and Jessica Mason (Sidney Sussex) were keen to turn the tables for the 2016 race and establish Cambridge’s place in Open Water swimming.

And so, on the Saturday night, the team quivered with trepidation at the prospect of the following morning’s herculean challenge. Even learning about the extreme reusability of cardboard gluten-free millionaire’s shortbread packaging over dinner failed to lessen the team’s nerves before they  slipped into their sleeping bags and set their alarms for 3am the next morning. Why so early? Well, according to the Henley Classic’s website, “This event is a celebration of mid-summer. It provides a unique opportunity to swim one of the most famous and beautiful stretches of open water in the world, at what we believe is the most beautiful time of the day, dawn. A key feature of the event is that you arrive in darkness and walk the 1/4 of a mile to the start into the sunrise, led by the torch carrier”. Of course, what it really means is needless tiredness and misery. But that pretty much sums up Open Water swimming so it seems apt.

At this point, this journalist must confess that, as a competitor in the race, and owing to the river’s murky opacity, I am unable to provide any sort of account of the race itself. However, everyone reached the finish line, despite the exceptionally strong current, and individuals’ races can be summarised as follows:

Andrew froze and was ambulance-ised

Jess, Callum and acting Captain Matthew had uneventful races (ie I can’t pithily summarise them in one word).

Alas, when the results came in, it wasn’t to be Cambridge’s day. Strong performances from the Oxf*rd team meant the Dark Blues won both the Men’s and the Women’s competitions (determined by aggregating the 3 fastest times from each uni). However, all was not lost for Cambridge. Lo! There also exists a Cambridge “Mob Match”, an opportunity for people in any way (tenuous or not) associated with the University of Cambridge, who weren’t selected for the Varsity match, to compete. This year’s Mob Match team featured a superabundance of talent, including two Blues swimmers (Henry Choong (St John’s), Dan Brackenbury (St John’s)) and an ironman triathlete (Ian Gaffney (St Edmund’s, alumnus)). With such an all-star line-up, the Cambridge Mob Match team surged to Cambridge’s first Henley Swim victory, trammelling Oxf*rd by an unprecedented 1 point. With so much to celebrate, the Cambridge team went on a mad one in Henley, hitting up the local Spoons for a 2000 calorie breakfast. While the overall result may not have been as desired, the team were nevertheless high-spirited. Open Water swimming at Cambridge is one of the more accessible watersports, and it continues to grow, with record Cambridge participation this year and some overall fantastic swims.

A hearty congratulations to all who partook (especially the Mobmatchers) and looking forward to seeing everyone pus hopefully some new faces for next year!