Twas the night before Bridgemas, when all through the town
Polo players were sleeping, ready for the drive down;
To Cardiff then Bath for two crucial BUCs games,
In hopes that the match report would mention their names;
But the big weekend did not to go to plan,
And it was at 3pm that our troubles began,

With 5 in one car and 5 in the other,
A broken bag set our start back an hour-
Then the men’s team called, saying they could not make it out
So the girls were alone on this long Bridgemas route.
With Black Friday traffic, three ambulances seen,
Didn’t make it to Cardiff, we were minus one team!

After frantic phone calls on a cold winter’s night,
A Bridgemas miracle! – Kind strangers answered our plight.
While one car turned back the other made it to Bath,
Where we drank Champagne and sat by the hearth
The next day bought pancakes and ice-skating and
Christmas markets and scones and lovely new friends.
More rapid than eagles our players they came,
Ref whistled, Captain Laura called them by name:
“Now! Lara, now! Becky, now! Francesca and Lucy,
“On, Ella, Frances, Ailsa! On, Laura and Katie!

First quarter of the game did not go our way,
But in the second Francesca saved the day
A brilliant goal followed by a second from Captain.
While pushing top players out stopped their goals from happ’ning.
Some top saves from Lucy (her first full game in goal)
Including one-on-one’s – she was on a roll!
When we got the ball we didn’t give in to fear,
Passing up the wing until we were near,
Where Laura and Frances were able to score,
And Lara her great first in quarter four.

Eight man ups and with some great passing from Katie,
Cambridge’s final score of 5-7 meant victory!
Player’s player to Lucy for fab goal-saving,
And Francesca’s defence and Lara’s goal – amazing!
And so Cambridge exclaimed, as we drove out of sight‍—‌
Happy Bridgemas to all, and to all a good night! 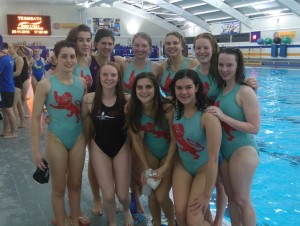