After just two weeks of training, the women’s water polo team travelled down to the Leys for their first match. I use the word ‘travelled’ as a force of habit; this is one of the only games that won’t include at least an hour-long journey to reach a pool that complies with water polo regulations. But I digress.

Expecting a friendly Upolo match, and still awake given there was no long drive, the women approached the game without too much apprehension. The first quarter showed promise, as the team kept a close eye and solid defence on KCL’s stronger players. Only one shot whizzed past the new goalie Blandine Bénézit. Shortly thereafter, Feng fired a return goal in to make it known that we weren’t only here for the fun.

The second quarter saw Cambridge’s strongest attack, yielding a total of five goals against KCLs two. But just as our scoring picked up, so the more light hearted nature of the game decreased. Former Captain Turrell victoriously retaliated against some aggressive play with a goal, mixed in with another solid two from Captain Schubert. Confusion over the rules of playing in a shallow pool did not interfere with the team’s defence as they implemented a few drops onto KCL’s stronger players. As the quarter drew to a close, the Cambridge women were feeling comfortable setting into a 6-3 lead.

But as the game drew on, it got much less attractive. The last quarter was filled with intensity, as KCL surged back, eager to prove the game was not yet over. With some ‘unfavourable’ refereeing, KCL pounded in five goals against the frustrated Cambridge team. But a highlight of the quarter was a decisive shot from Flaherty her second of the game, proving once again that Canadians are a real asset to our team (I’m not biased I swear). The shot boosted morale and the team surged back stronger in the last few minutes, but alas it was not and the final score fell 9-11 for a KCL victory. 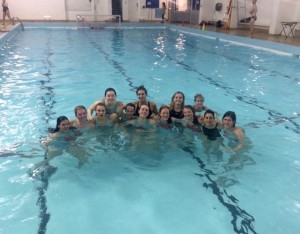 Despite the loss, a hearty congratulations goes out to Lamaison, Giordaniello, Talarmain, and Bénézit for their first game for Cambridge. There was plenty of potential in the water and the team looks forward to harnessing it for the match against O*ford next week, where they will be welcoming even more of the new squad into the water.