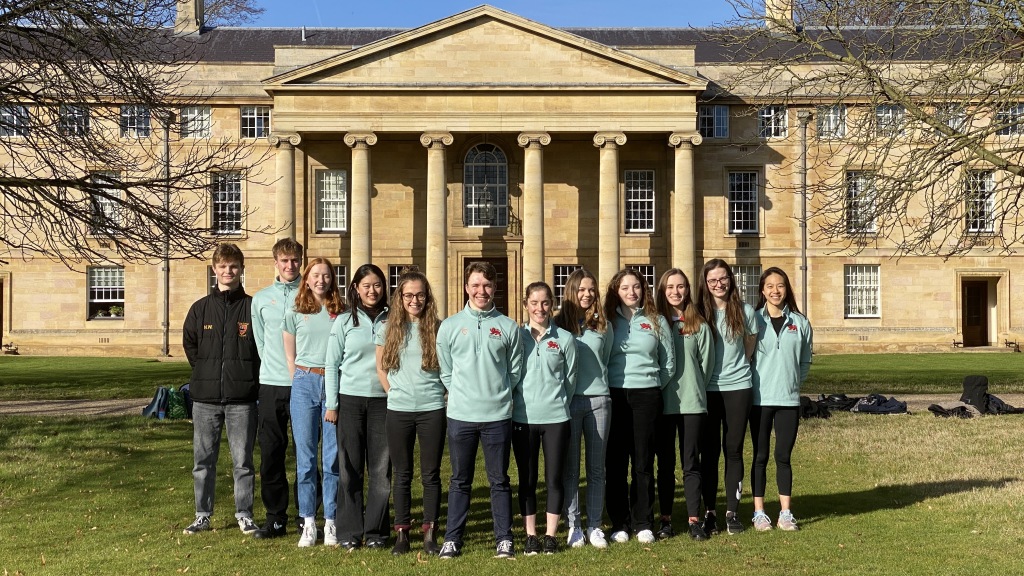 Varsity this year was hosted by Oxford at their Rosenblatt pool, which meant an early start for the Seconds. The Seconds have had a particularly dynamic squad this year, with tough training times, some of the swimmers found it difficult to work around academic commitments and other sporting commitments, as well as some notable losses due to injury. With Renat Samur stepping up from the development squad, Raphael and Tads dropping down from the Blues to help fill the men’s squad, we managed to pull together a full squad! At 5:30 we departed for Oxford. After a quick parade, and an intense warm up, we could feel Oxford eyeing us up from across the pool.

The morning’s proceedings kicked off with the 100 IM, with the gent’s squad unsure what to expect; cheers erupted on poolside when Ed Roberts snatched first place by a second and a half from the first of the Oxford swimmers with a personal best time of 1:05.29. Ben Roberts secured 3rd place closely behind with a fantastic performance.

Next up was the 50 backstroke, where Grace Riley put on a fantastic performance to take 3rd place less than a second behind 2nd, with a 35.39, and Julia Dabrowska posted a personal best of 40.98. Tads put in an equally strong performance for the gents, securing 3rd with a 29.66.

This was followed by the 100 free. Evie Anema secured 2nd place with a blistering 1:04.4. Despite this performance some say the pool was still too warm for her taste. Raphael’s 58.02 marked 3rd for the gents, and Nathan Williams was closely behind with a personal best of 58.29.

The 50 Fly followed, where Anna Stevens secured 3rd place with 32.62, and late squad addition Abbie Lewis put in an incredible performance, swimming 35.31 despite only being with the squad for a few weeks prior to Varsity. The gents 50 fly proved equally stimulating when underdog Harry Weston brought it home, securing 1st place for the light blues with a rapid 26.67. Some say the warmup was his 4th training session of the year.

Into the break, Oxford led with a 20 point lead, but the squad was undeterred, with adrenaline running higher than ever as the second half kicked off with the 200 free. Another strong performance from distance swimmer Evie Anema tagged third place for the light blues with a time of 2:18.38, just 3 seconds off first place in what was a tense race right down to the final flags. The gents 200 free proved equally fruitful with Tads bringing home the full 4 points with first place, pipping oxford swimmer by 2 seconds to the pads.

50 breastroke was a loud one, with much anticipation from poolside regarding Ed Roberts’ performance. Some say he’s our very own Peaty. After a tense first length, Ed bolstered his lead and the scoreboard confirmed the win for Cambridge with a 32.32, pipping his Oxford rival by 0.3 seconds, and bagging his second personal best of the day.

Finally for the individual events was the 50 free. Despite difficulties making it to sessions due to various far-flung placements, the squad knew that Anna Stevens was fast on paper and quicker still in the water. Placements didn’t stop her from taking the lead in the first length, and after managing to fend off the Oxford swimmers she took home another victory for the light blues with the time of 29.71, a full 0.4 ahead of oxford. Despite this lead though, all swimmers finished within a second of each other, with Grace Riley narrowly missing out on 3rd by just 0.1 of a second, but still posting a personal best of 30.84.
For the gents, again a close race ensued, with just 1.2 seconds between first and last place. Wild card Harry Weston took to the blocks, and managed to convert all his erg training into a mighty performance for Cambridge, securing the win with a phenomenal 25.33. Ben Roberts put in an equally strong performance posting an impressive 26.55.

Oxford had a 26 point lead into the relays, and whilst the hopes of a win for the light blue seconds at Rosenblatt seemed only a distant dream, the squad was determined not to go down without a fight, and a loud one at that.

First up was the medley, with both the gents and the women conceding to Oxford, with the gents’ race being particularly close, with the light blues being just 1.5 seconds behind, owing to Oxford impressive backstroke performance.

Finally, all eyes fixed on the calm waters for the freestyle relay. After a close race the women were just 5 seconds behind, and whilst not beating Oxford, it represented a strong performance from the women that they should be proud of.
The final relay, the gents 50 freestyle relay proved to be one of the most intense races of the Seconds Varsity, and perhaps the closest I have ever seen. Despite strong performances from Tads and our dev squad swimmer Renat, Oxford put in a strong performance, and led by 3 metres into the final 100. Ben Roberts, our third swimmer, was faced with the daunting task of reeling Oxford in. Unbelievably the fresher from Fitz was able to take the wind from Oxford’s metaphorical sails, completely closing the gap, and leaving both shades of blue neck and neck going into the final leg. Stepping up to the challenge for Cambridge was top trainer Harry Weston. The tension on poolside was tangible. After hitting the water for the 6th time this year, in perfect synchrony with the oxford swimmer, Mr Weston surfaced a metre ahead of the Oxford rival. No doubt spurred on by the screams and chaos that were unfolding on poolside, he managed to fend our rivals off to the flags, and the team secured a win in the last event beating oxford by a full second and a half, with a time of 1:42.11, ending our fierce battle on a high.

Despite not quite being able to clinch the win from oxford, the squad should be very proud of themselves, the determination they showed right up until the last race, and phenomenal team spirit that was present throughout the whole event was truly fantastic. Despite difficulties making training times, a big congratulations should go out to the women’s squad who’s commitment to training regularly translated to some excellent personal bests.

On behalf of the team, I’d like to extend a massive Thankyou to Oxford for hosting us this Varsity, to Felix Gallagher for organising this fantastic weekend, to the Oxford Captains Lucy Greenwood, and Joel fernandez, and finally to our Coach, Chris Greenhalgh, and all our friends and family who have helped us along the way! I wish both squads the best of luck for any future competitions they may have, both in swimming and the squad’s many other sporting disciplines.

We look forward to duelling again next year, a little closer to home, in more familiar waters.