As the deadline approached, the women’s blues water polo team had one game left to play, their 8th in the league since the start of term. But this was to be no ordinary match: with a 1:15pm start, all the refs had actual jobs to do. Though Irwin now has the most comprehensive list of refs in the East of England, none of them were free and the match was going to be cancelled.

So at 8am we prepared to go to our scheduled lectures. Until Bath, in a stroke of kindness, asked to play regardless, saving us from a forfeit. Thus, with just under an hours notice, we gathered our equipment and rushed to our cars, ready to make the two hour journey to our home match (a constant source of agony). We managed to draft in a last minute ref, who has our eternal gratitude.

We arrived at the pool with ten minutes to spare, and cried out “let’s win this for Ella – so she doesn’t have to arrange another match!” As she set up the clock, we got ready to go, but the first quarter saw not a single successful goal. We cut and defended with a frenzy, but our attacks remained tentative. However, that quarter did give Captain Schubert a chance to warm up.

Irwin hopped in the pool, leaving Robbo to table. And then the goals started coming, from Schubert, and Schubert, and Schubert again. Though at one point we were a terrifying 4-2 down, after words of encouragement the team turned it around, showing strong defence and a more aggressive attack. The whole team got together, making beautiful passes into pit, and we got to half time with a 5-4 lead, all five goals put into place by Captain Schubert.

Despite some clock mix-ups, we got into the third quarter, ready to show bath that they would not be getting any more goals away. And indeed that second quarter had proved to be their only lucky one. Turrell got back on defence, and Robinson had a lovely block, helping Morgan keep the ball out of the goal. And in attack, Schubert added another two to her impressive list of goals.

With a 7-4 lead we went into the fourth quarter, and even had two full subs, as the Birmingham’s men team offered to help table. Quick newbie, Mackett scored two goals off a cheeky pass, even winning a tussle against the goalie. Though the bath team got one goal away, Feng’s whistled a shot in, and Schubert scored another to seal the score at 11-5 in favour of Cambridge at the final whistle. 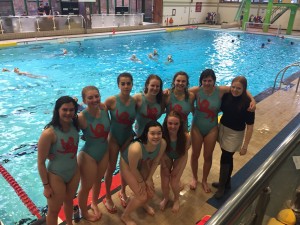 After all the stress, the team is straight off to semi-finals, having placed second in the premier south league.