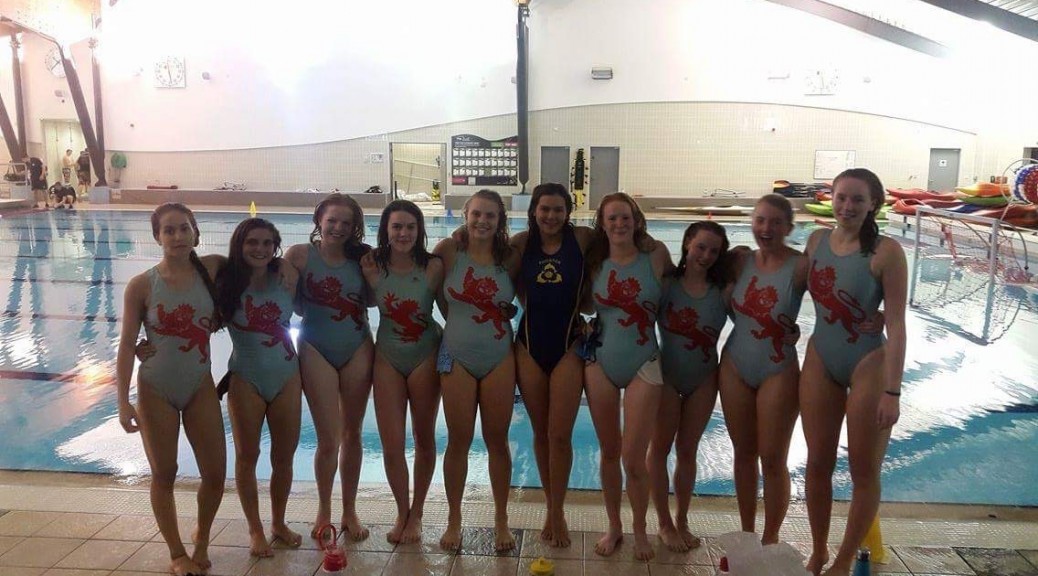 It might have been short notice, 48 hours in fact, but with high team spirits from our win against Oxford on Sunday, we rallied the troops and eagerly awaited our 3rd match of the season against the Surrey Stags. After our busy days and the challenge to even find our zip cars, we finally set off with Spotify in toe and made our way to Surrey’s incredible pool. It knocks the socks off ours, but The Leys is home and we love it (ish)!

Upon meeting Surrey’s captain, we were once again expecting a friendly Upolo match because, like us, they also had newbies on their team; and apparently the girls weren’t planning on any costume grabbing in the game – oh, how times changed when the whistle was first blown! Still, a massive shout out here to Katie Puhorit (‘always on the wing when needed’), Beki Mills and Eleonora Garau for amazing first matches for Cambridge – we’re so proud of you girls!

Our first quarter was hugely promising, with goals from Lucy Morgan [(wonder) woman of the match for amazing attack, goal scoring, as well as a fantastic attempt in goal!], Ella Irwin (always on form) and, our very own captain, Laura Schubert. With only 2 goals being scored the Surrey ladies, we were up and on target after the first 7 minutes.

Lucy Morgan scored again in the 2nd quarter, with a fantastic shot. So, despite a 3rd goal by Surrey’s Buttle, we were leading 4-3 at the halfway stage. Hopes were high after our 3 newbies all played fantastically, making their debuts in this quarter. Despite this, it was perhaps the 3rd quarter and lack of conversions in these 7 minutes that saw our weakest part of the match. Legs were tiring and, unfortunately, with fouls not being blown (to our new coach Ashley’s dismay), it was all-square with only the final quarter to go. We weren’t giving up though because that simply is not the Cambridge way.

The last quarter was exceptionally tight, with Schubert and Irwin once again showing what fantastic players they are, scoring 2 and 1 goal(s), respectively. The scoreboard remained at 7-6 for a while, and we had so almost clinched the victory. We defended hard, but the home captain showed her form and with less than 1 minute to go it was 7-7. With 42 seconds to play, we had one final attack, only for Irwin to come so close by hitting the bar. The final 34 seconds were, therefore, extremely tense as we could not allow Surrey to score in their final counterattack. More nerve-wracking still was that the Surrey girls were awarded a corner with 5 seconds to go. Screams like “press” and “play down the clock” came from the bench, and that’s exactly what we did. The final whistle was blown; and, although we were so close to the victory, a draw of 7-7 is still one to be proud of! 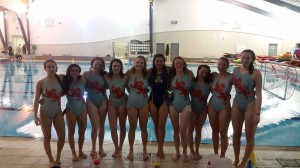 Now, all exhausted and smelling of chlorine but still smiling, it was almost time for us to say goodbye and make the 2 hour journey home. Our roadtrip was great, but by 1am we were all home safely and ready for bed. Only our wonderfully supportive captain could fully describe the feeling at the end of the trip, “For some strange reason, I enjoy driving 4 hours on a Tuesday night and splashing around in chlorinated liquid for an hour; and it’s mostly because of the fact I’m playing with all of you, seeing you all (and myself too) improve every time, and knowing I’ll get home again because you’re in the car with me shouting directions/whispering ‘red light’!”

It may be a goodbye for now, but roll on Saturday against Bristol. Good luck girls – you’ll ace it!