The first time we face O*ford this season – game one of three, culminating in the most important match of the year. And what a wonderful match it was. The second match of the season brought in more new players and a better-established strategy regarding the attack. We did some good passing down the wings to work it found the arc. 2-first-quarter goals were from Frances Turrell and one was from Captain Schubert (her first of many this game). That along with our solid defence gave us an early lead, putting pressure on Oxford for the rest of the match.

The second quarter was a little tougher with one shot sneaking past from O*ford returned only towards the end of the quarter by Schubert. But still an impressive commitment from our defence prevailed, even through several man-down situations; thanks to the defence and Bénézit’s goal keeping we managed to keep the 3-point gap.

We got back to our top form in the third quarter with 3 points scored by Schubert and Irwin, setting up some formidable attacks and getting the whole team involved for the goals. Our cohesive performance and the use of a pre-game tactics session paid off and we kept our focus throughout. But it may be time to bring back the ‘more you shoot the more you score’ chant as a few opportunities for scoring went unused after hard work to get the ball in.

However, the final quarter brought with it some tiredness – as can only be expected after a hard worked game. The result was a few missed opportunities, especially when attempting new man-up defences. Three shots still whizzed past the O*ford goalie, as we managed to keep our spatial awareness and keep our eyes on O*fords defence. And so we maintained our three goal lead from the beginning, and held on for a win!

Huge congratulations to Hobson and Tritton for their first games playing for Cambridge, and to Schubert for an incredible scoring record, and determined play earning her the title of woman of the match! 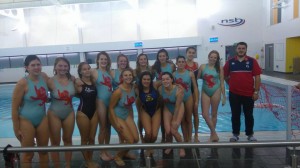